Home
Self Leadership
The best life coach training I received?

Before you start digging deeper in the internet seeking to find the best life coach training, I want to share a story and some tools with you to help you begin your journey much quicker. Ultimately, becoming a World-class Life Coach has more to do with who you are BEing, than what certifications you have obtained.

At the age of 17, during the heat of the Second Liberian Civil War[1], I was separated from my parents, fearing conscription into the Government’s Militia Forces.

Through a number of aligned circumstances, I found myself in the U.S. seeking asylum. I stayed in the U.S. for the next four years trying to convince immigration officials and judges of why I deserved asylum. I was unsuccessful, and in December 2007, I was deported, returning to Liberia with only $200 to my name.

The thing is if you live in America, and don’t yet recognize that you live in what is probably the best nation on earth, then I’m sorry, but there’s something wrong with you. For many Africans, getting deported from America is the worst thing that could ever happen to you short of losing your own life. And this is simply because America is the land of opportunity where anyone could become what they wanted to be.

So, for me, returning to Liberia was not easy.

When I first made the decision to become a Business Consultant, and Subsequently a Life Coach, I spent a lot of the time asking myself, “Who the heck was I?

Who was I to say I want to be independent when I did not then even have my bachelors’ degree completed?

Who was I to be a business consultant and coach?

Who was I to teach others?

Who was I to even think of becoming a leader?

Who was I to dare think that I could strive for, and attain Financial Security – even though I still struggle with this one?

I was nothing but a kid who entered the promised land and got kicked out 4 years later.

That tape played in my head over, and over.

I felt that I had something to prove.

So early on, in my coaching and consulting career, my struggle was with myself. I knew intellectually that I could be anything I wanted no matter where in the world I was. The problem was, nothing around me provided any evidence that it was even remotely possible.

Here I was conducting training on possibilities, motivation, and inspiring other people to dream when I was doubting my own possibilities and dreams.

We have all been through different things in our lives.
Things that we would often rather keep buried.
And then we allow those situations to define who we are.

Well, from one coach to another, I’m here to remind you that none of the things you’ve dealt with in the past has any negative effect on your ability to powerfully serve people, rather by drawing on them, you get to truly understand where people come from.

And with that I ask again:

REALLY! WHO ARE YOU?

Serious, tell me who you are.

I want you to own the mean badass of a difference-maker that you are.
Own the impact you have and are yet to make in the world. Own that which makes you unique.

THE POWER OF YOUR QUESTIONS

By now, you are beginning to understand the impact of just one question.

Your mission as a powerful coach is to help your clients to upgrade the quality of the questions they are asking themselves.

The better the questions we as humans ask ourselves, the better the solutions we bring about.
The key is in the quality of questions you ask your clients, giving them time to process each question.

It is also important to note that sometimes, the insight, and possibilities, are not in asking a different question, but rather, asking a question differently.

Take the question Who am I?

This question held me back for a good part of my professional life, It’s had me play small. It’s had me look for ‘heroes’. It’s had me feeling less than and trying to ‘prove’ myself.

A tiny change of emphasis on the second word, to Who AM I?
Enabled me to answer that question MYSELF, for the first time, instead of seeking validation.

Your clients show up believing they live in a world with ‘hard edges’. A world where some things are possible, but others are IMPOSSIBLE. If you want to get to these blind spots? Ask more powerful questions.

“The single most important factor in becoming a better coach and a better leader is not in your training, your skills, or your education but in your self-awareness. “

It is your clients’ blind spots that hold them back, not the things they already know they need to improve on.

Thank you for subscribing.

The form collects name and email so that we can add you to our newsletter list for project updates. Checkout our privacy policy for the full story on how we protect and manage your submitted data! 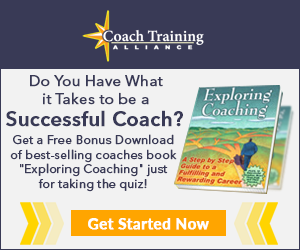